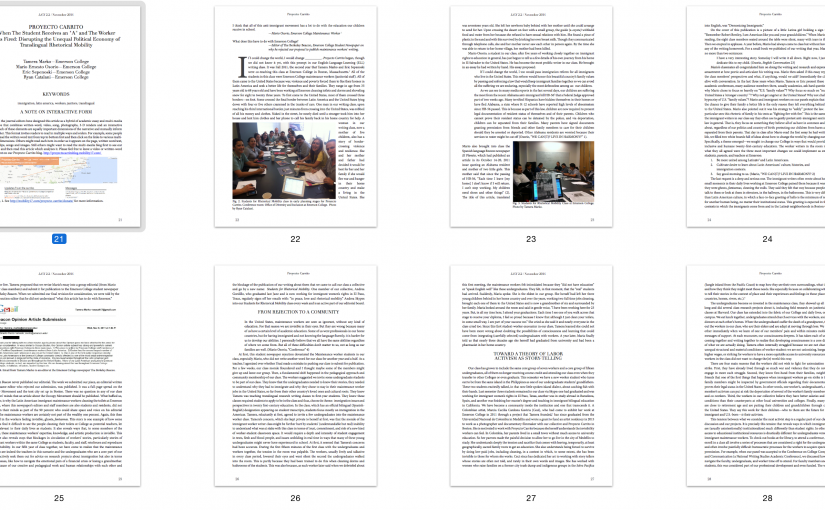 The article, titled “Proyecto Carrito – When the Student Receives an ‘A’ and the Worker Gets Fired: Disrupting the Unequal Political Economy of Translingual Rhetorical Mobility,” was published in a special issue of Literacy in Composition Studies called “The New Activism: Composition, Literacy Studies, and Politics.” It was co-authored by Tamera Marko, Mario Ernesto Osorio, Eric Sepenoski, and Ryan Catalani.

It is an interactive article:

We and the journal editors have designed this article as a hybrid of academic essay and multi-media narrative that combines written-word, video, song, photographs, 3-D renders and an interactive blog. Each of these elements are equally important dimensions of the narrative and mutually inform each other. This format invites readers to read in multiple ways and orders. For example, some people might read the written word text from top to bottom first and then click on the links to various multi- media dimensions. Others might read each item in order as it appears on the page, written word text, video clips, songs and images. Still others might want to read the multi-media blog first to see our context and then read this article which analyzes it.

If I could change the world, I would change __________. Proyecto Carrito began, though we did not know it yet, with this prompt in our English-Language-Learning (ELL) writing class. It was Fall 2011, the second year that Tamera Marko and Eric Sepenoski were co-teaching this class at Emerson College in Boston, Massachusetts. All of the students in this class were Emerson College maintenance workers (janitorial staff). All of them came to the United States because war, violence and poverty forced them to flee their homes in Latin America and seek a better life for themselves and their families. They range in age from 35 years old to 68 years old and have been working at Emerson cleaning toilets and dorms and shoveling snow for eight to twenty three years. To first come to the United States, most of them crossed three borders—on foot. Some crossed the final border between Latin America and the United States lying down with four or five others crammed in the trunks of cars.